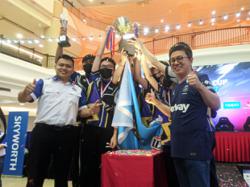 IPOH: Youth and Sports Minister Datuk Seri Ahmad Faizal Azumu (pic) hopes the public will not haul the ministry over the coals in the matter of allowances for athletes.

He said the decision to decrease the allowances was due to budgetary constraints.

"Ever since the Covid-19 pandemic started, the Federal government has been focussing on helping those who are badly affected.

"I will also take the suggestion by Deputy Minister Ti Lian Ker to review (the cases of) athletes (who) rely solely on the allowance issued by the National Sports Council (NSC)," he told a press conference in Tambun on Monday (Jan 10).

Ahmad Faizal, who chairs the NSC management board, said last month it would only take into account achievements at the highest level to enable national athletes to remain in training following the discontinuation of the Podium Programme.

Previously, over 400 athletes were under the programme.

Ahmad Faizal said although the programme had been discontinued, a similar one had replaced it, although with a smaller budget.

"For now, we have dropped at least 144 athletes. I know some members of the public questioned the athletes’ performance review since we were in a pandemic from 2020 to 2021. But their performances were reviewed (for the period) 2018 to 2021.

"Despite the discontinuation of the Podium Programme, the ministry has tried its best to help as many athletes as possible based on what we have.

"We know each of our athletes’ financial (situation), therefore we felt that the allowance cut wouldn’t impact them much.

"There are some athletes who have stable monthly income and additional allowances," he said.

Ahmad Faizal also commented on social media users' suggestions that ministers should resign and their salaries used to help the athletes.

"Even if a minister tendered his resignation, it wouldn’t be able to help the athletes much.

"I also want to stress that as a minister, I am not involved in the athletes’ contracts.

"Each contract is reviewed by their own sports association.

"For example, I only found out about Tan Cheng Hoe's resignation as the national football coach through a media outlet.

"To resign, he will write a letter to the football association, not to me," he said.