PETALING JAYA: While back-to-school shopping seems to be in full swing with schools reopening next week, some parents are mulling whether to stock up on new uniforms.

This is because many fear that another round of movement restrictions may be imposed, causing schools to close again and lessons to be conducted via home-based teaching and learning (PdPR).

Some parents are dreading buying uniforms because for the past two years, the clothes have been sitting idle in the wardrobe.

Bank manager Siti Rashidah Abdul, 47, said the price of uniforms had also gone up, with a top costing about RM30.

She said children needed at least several sets of uniforms for national school as well as sports and religious school.

“My daughter cannot fit into her clothes anymore. I was lucky that I bought some in bigger sizes but I will still have to fork out for school shoes, socks and new sports attire.

“The ones I bought last year were hardly used, especially for my Year One son, because they only went to school for a couple of months,” she said, adding that she would probably play by ear this year in case movement control was reimposed.

She also said that there was another added cost in wipes, masks, cutlery and sanitiser, which children are required to carry to schools as part of the new normal during this pandemic.

Public relations executive Nurul Fazilah Kamal, 29, felt that buying school uniforms was a waste of money for parents, particularly for those who are financially strapped.

She, however, conceded that children could not go to school without them, as such parents have to fork out money to get new uniforms.

“The pandemic has been extremely financially challenging for us. We have to keep buying more and more stuff for the kids.

“When they go to school, their bags also get super heavy or damaged because of the heavy books and we have to keep replacing all these items,” said Nurul Fazilah.

For homemaker Mimie Herrie, 42, her children will be reusing their uniforms this year.

“I am not buying new ones because the uniforms still fit.

“It’s a little concerning whether they will be going to school properly again, so we just have to be prepared,” Mimie said.

However, the Education Ministry has allowed students to opt to wear their own clothes to school as long as the attire is proper and neat.

Education Minister Datuk Dr Radzi Jidin announced the move in September last year as the ministry was aware that many parents would find that their children could not fit into their uniforms anymore while some parents had to contend with financial constraints caused by the pandemic.

The rule was to last till the school term in mid-December but the third term of the 2021/2022 session has been extended due to the floods.

School is set to reopen in a week, with the session ending in March. 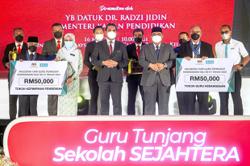