GEORGE TOWN: Calls have been made to put greater protection for pre-war structures here as George Town is listed as a UNESCO World Heritage site.

The issue has been sparked by the move by the Penang Development Corporation (PDC) ordering tenants to move out from homes built in the 1920s and 1930s in the Jalan Burmah area.

The houses affected are in Jalan Servis, Jalan Irrawaddy and Jalan Chow.

The area was formerly an enclave of the Burmese community and is said to be one of the few places in the world where several roads are named after Myanmar.

Penang MCA chief Datuk Tan Teik Cheng reminded the DAP-led state administration not to forget the existence of pre-war structures was the reason that led to George Town being listed as a UNESCO World Heritage Site.

“The buildings along Jalan Chow Thye and Jalan Servis were constructed between the 1920s and 1931 and are considered Category II Heritage Buildings.

“In 2018, Chief Minister Chow Kon Yeow said that Category II heritage buildings outside the heritage area can be demolished.

“Not having specific requirements to prevent their destruction can and might be abused as a loophole to circumvent the caveat that such demolitions are subjected to the local council’s approvals depending on the condition of the buildings.

“Besides Runnymede Hotel, Metropole Hotel (formerly Asdang House) among the other pre-war buildings, and now Burmah Square. How many more of Penang’s stately mansions or edifices constructed during colonial times are set to be reduced to rubble for generic skyscrapers?” he questioned in a statement on Tuesday (Dec 7).

Tan added the state government should instead be considerate towards the struggles of the smaller-scaled business community and provide the latter with incentives to restore and preserve the pre-war structures.

On Dec 1, the tenants occupying 34 premises in Jalan Chow Thye, Jalan Servis and Jalan Irrawadi in George Town, received notices terminating their tenancy as the PDC had plans to develop the land.

They were asked to vacate within a month, which is Jan 1, next year.

However, Chow later said that the tenants in Burmah Square have been given a reprieve and need not move out by Jan 1.

He said based on a meeting with the tenants on Sunday, PDC had decided to give them more time while exploring other options to be taken into consideration.

Chow added that the PDC would soon send new letters to the tenants on their tenancy status. 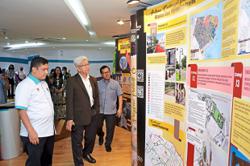