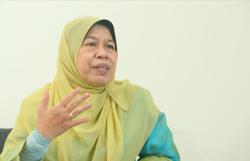 KEPALA BATAS: People who showed up for the Malaysian Family Sale here were quick to snap up various food items on offer for a lot less than usual.

Many from this town near the northern end of mainland Penang bought fresh whole chickens at just RM5 each compared with the usual price of RM15.

Some 3,000 people, including those from Sungai Petani in Kedah, converged at Wisma Umno Kepala Batas where the sale was held.

Housewife Hafizah Helidi, 31, said she was glad that she did not miss the chance to stock up as the prices of daily necessities have been increasing.

She said besides chicken, other groceries sold at lower prices were eggs, rice and local beef.

“This programme can help people from the lower income group like us buy daily groceries at low prices,” she said.

Halimah Yahya, 57, said the programme was held at the right time as people have been affected by price hikes over the past few weeks. All stocked up: Shoppers enjoying the bargains at the Malaysia Family Sale held at the parking lot of Wisma Umno in Kepala Batas. — ZHAFARAN NASIB/The Star

“We need more programmes like this to help us get basic necessities at good prices,” said the mother of four, who is a general worker at a highway toll plaza.

Factory worker Ismail Daud was also glad he got a chance to buy sundry supplies at almost cost price.

“Where else can you get whole chickens for RM5 each and a kilo of local beef for RM30? It is amazingly cheap,” he said.

Beef seller Shahir Hashim said the response was so good that he was sold out within a few hours.

Syarikat Beras Faiza marketing executive Abdul Halim Abdullah said the bestseller at his booth was the 10kg bags of rice, adding that he would continue to support the Malaysian Family Sale.

Earlier, Kepala Batas MP Datuk Seri Reezal Merican Naina Merican said the sale would be conducted every week in his constituency until the prices of daily necessities were back to normal.

He said the Domestic Trade and Consumer Affairs Ministry, the Federal Agricultural Marketing Authority and other related agencies had given an assurance there would be enough supply.

“Several shopping malls have also agreed,” he said after visiting the event yesterday.

Reezal helped to subsidise the goods sold in the 10 booths with funds of RM14,943.

The programme was organised by his parliamentary constituency.

He said the sale would be held regularly until February. 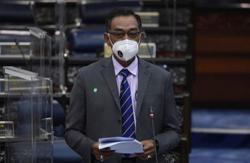 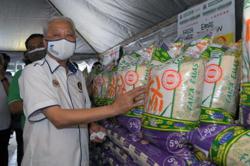