The Home Minister said the "cartel’s" involvement was not only related to promotions in the Immigration Department but it was also said to have used immigration officers for its benefit.

According to him, his deputy, Datuk Jonathan Yasin, had said that in Sabah there were advertisements offering Temporary Employment Visit Pass (PLKS) issuance services and it should not have happened because the Immigration Department had never appointed any agent for any immigration matters.

"Investigations will be made transparently to identify the officers involved (with the 'cartel' activities) and if there are any, we will take action against those who abuse their power,” he told a press conference after attending the 2021 Immigration Day Celebration here Wednesday (Dec 1).

Earlier in his speech, Hamzah said there were "cartel" members who were free to enter and exit the Immigration Department and there were also those that sat at airports and national entry points.

He said the existence of the "cartel" in the Immigration Department has tarnished the reputation of the department which always got the best ranking in immigration services at international airports, where this year, KL International Airport (KLIA) got fourth place in the World's Best Airport Immigration Service 2021, by Skytrax.

"If we just go to Google, the issue of Malaysian immigration, the most important are cases of corruption and integrity. This is something I ask everyone to prevent. It is our responsibility is to protect the country,” he said.

Hamzah said the use of high technology and advanced assets such as automation, digitalisation, robotics, analytic CCTV, Internet of Things and Artificial Intelligence could reduce the existence of "cartels" or syndicates that could damage the image of Immigration as it could reduce dealings that required direct communication between immigration officials and customers. - Bernama 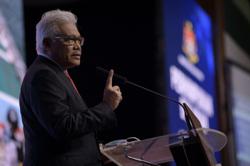