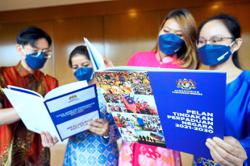 In his speech launching the 10-year plan on Sunday (Nov 28), he also called for cooperation from every level of society including government agencies, the private sector and non-governmental organisations (NGO).

"The National Unity Action Plan (2021-2030) is an effort to reimpose the initial goal of uniting Malaysians as embedded in the five principles of the Rukun Negara.

"The National Unity Ministry, led by its minister Datuk Seri Halimah Mohamed Sadique, will be the driving force behind the Malaysian Family's efforts in understanding the wider definition of unity and inclusiveness with the Rukun Negara as its core," Ismail Sabri said.

A total of 57 programmes would be executed under the plan to achieve five strategic cores which include preserving the democratic constitutional monarchy; shaping a society that appreciates and practices unity; empowering a fair and just socio-economy; guaranteeing openness and tolerance towards religious and cultural differences; and building a progressive society through science, technology and innovation.

"It is the most significant plan for the ministry in efforts to lead the national unity agendas," he said.

He explained that KAMI stood for the four dimensions of the plan - "K" for Karib (Intimacy), "A" for Aksesibiliti (Accessibility), "M" for Majmuk (Diversity) and "I" for Inklusiviti (Inclusivity).

"This plan is built based on research involving people from various backgrounds nationwide focusing on cultural and religious diversity in order to ward off any efforts that would tarnish national unity," Ismail said.

Halimah, meanwhile, said that the five-year plan would be administered by her ministry through activities and initiatives that are in line with the five cores of the umbrella action plan.