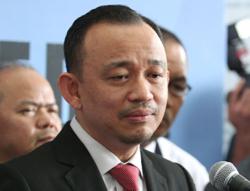 The Simpang Renggam MP said on Saturday (Nov 27) that one of the reasons for joining PKR was that he wanted to continue to represent members of academia in politics, aside from representing the people in need of political change.

"I felt the call to join PKR after seeing their loss in the recent Melaka state election. I believed that the people must be saved from the corrupt.

"Although PKR is not seen in a very good light right now, joining a party at its weakest is not being a ‘frog’ but it is the price of a fight (perjuangan) for the people and reformation," he said.

He added that he hoped his decision to join PKR will bring new hope to Pakatan Harapan that they still have the chance to bring change in the political arena.

"The people should play their role in creating a better Malaysia that is clean from any corruption and has integrity," he said, adding that he is targeting to have more than 1,000 new PKR members with 28 branches next year.

Maszlee was among six MPs, including Tun Dr Mahathir Mohamad, who were ousted from Parti Pribumi Bersatu Malaysia after a tussle with party president Tan Sri Muhyiddin Yassin in May last year.

He later joined Parti Pejuang Tanah Air before leaving the party to be an Independent MP in November last year.

During his tenure in government, Maszlee courted controversy over the introduction of Jawi in vernacular schools when Chinese education groups were against it.

The controversy led to hostility from Malay pressure groups, calling for vernacular schools to be shut down.

Maszlee stepped down as education minister on Jan 2 last year, and his resignation took effect on Jan 3.