IPOH: A retired marine police personnel with the rank of corporal was fined RM100,000, in default of 57 months jail by the Sessions Court here for accepting a bribe of RM20,700.

The judge also ordered that savings amounting to RM18,494.75 including interest to date, in the accused's Maybank Islamic Berhad account, be forfeited to the Malaysian government.

According to the seven charges, Zubairi, who was then the PSC 16 patrol machinery chief attached to the Marine Police base in Kampung Acheh, Sitiawan, received RM20,700 in cash from Tan Kuang Hooi, 50, who was known to have a connection with his official work which involved enforcement under the Fisheries Act 1985, on a vessel with registration number PKFA 9710.

Zubairi was charged with committing all the offences in Sri Manjung town centre, between March 2 and Sept 29, 2017, and the charges were framed under Section 165 of the Penal Code which carries a maximum jail term of two years, or a fine or both.

Earlier this year, on Jan 26, Zubairi pleaded not guilty in the same court to 43 charges of accepting bribes of more than RM146,000, as an inducement for him not to take action against 18 boats that committed offences under the Fisheries Act 1985.

He was charged with committing the offences at Maybank Berhad, Sitiawan branch, between May 1, 2016 and July 30, 2019, and the charges were framed under Section 17 (a) of the Malaysian Anti-Corruption Commission (MACC) Act 2009 and is punishable under Section 24 (1) of the same law which carries a maximum sentence of imprisonment of 20 years and a fine of five times the value of the bribe or RM10,000 or whichever is higher, if convicted.

Then on Jan 27, Zubairi pleaded not guilty to 101 other charges under Section 17 (a) of the MACC Act involving a bribe of more than RM243,000 in connection with the same act.

In today's proceedings, the court has taken into consideration 137 charges under the MACC Act, according to Section 171A of the Criminal Procedure Code, after the accused pleaded guilty to seven alternative charges under the Penal Code. 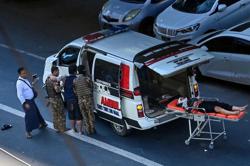