KOTA KINABALU: A former beauty queen who was captured on video shouting at a policeman during a roadblock in June has pleaded not guilty to outraging the cop’s modesty. The accused, who is also an entrepreneur, is charged with insulting Kpl Maslin Samih by, among others, saying “Nasib kau ni lelaki, kalau kau perempuan sudah lama aku kasi telanjang kau, aku rungkup kau (It is fortunate that you are a man, if you were a woman, I would have stripped you naked and pounced on you)”.

These words were allegedly heard by one Inspector Hamzah Ismail and a witness known as “Rosmini” following the alleged incident at about 5.30pm on June 1 at a roadblock in Jalan Kepayan, near here, while Wawa was on her way to donate water to flood victims.

Wawa, who was Miss Borneo 2011, was released on RM2,000 bail with two sureties pending mention on Dec 9. Upon conviction, she could be jailed up to five years or fined, or both, for the offence under Section 509 of the Penal Code. 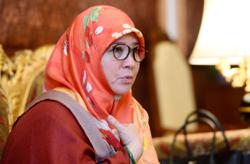