Melaka Polls: I am no 'dragon, crocodile, lion or tiger', says Ab Rauf

ALOR GAJAH (Bernama): Melaka Barisan Nasional chairman Datuk Seri Ab Rauf Yusoh rejects the label of "dragon, crocodile, lion or tiger in Melaka” given to him, saying he is merely a "humble" leader who is working hard to ensure victory for the coalition.

Ab Rauf, who has been accused of playing "Big Brother” and overshadowing former Chief Minister Datuk Seri Sulaiman Md Ali, said people could have misunderstood his responsibilities and tried to create a negative perception of him.

"I am viewed as such because I am driving the party with the aim of winning the Melaka state election. I reject this perception with an open heart.

"However, as a leader, I can't escape criticism, and I regard this as political games by certain quarters,” the Melaka Umno chairman told Bernama TV in an exclusive interview here Thursday (Nov 11).

Ab Rauf, the BN candidate in the hot seat of Tanjung Bidara, said those who were playing up this issue were irresponsible not only to themselves but also to the people and the state.

He did not rule out the possibility that allegation of his domineering character were propagated by people who were eyeing the Chief Minister's post.

Ab Rauf said as the state Umno chief, he was seen as being close to Sulaiman, who is state Umno secretary, but he knew his boundaries and never interfered in the state administration.

"I respect the boundaries because to me, a state government complete with the state exco structure would definitely understand the function of the state administration,” he said.

Early voting is on Nov 16 and polling is set for Nov 20 to elect representatives to the 28 seats in the Melaka State Legislative Assembly. - Bernama 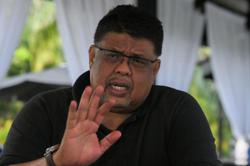