Lau also said the staff who were involved in the case must be firmly dealt with by the Education Ministry.

"Acting speedily and sternly in this matter would restore public and students' trust in the ministry, and more importantly, prevent the incident from spreading and damaging the Education Ministry's reputation," said Lau in a statement on Thursday (Oct 28).

Lau noted the latest incident at the school in Setapak was the second incident that took place this year.

"The last known incident which happened at the beginning of the year had received widespread scrutiny from all walks of life. Thus, why are 'period spot checks' still recurring?" questioned Lau.

The issue first began in April, when some students took to social media saying that period spot checks were happening in schools during the month of Ramadan.

At the same time, Lau commended Education Minister Datuk Dr Radzi Jidin for immediately meeting the students at the school in Setapak right after arriving in KLIA from Kuching, Sarawak.

Lau also noted that Radzi, who arrived with education ministry secretary-general Yusran Shah Mohd Yusof and director-general Nor Zamani Abdol Hamid, was eager to get an explanation from the school's principals and teachers.

"Hearing out the latter's view indicates that he is taking this matter seriously," added Lau.

Meanwhile, Lau said that no one at learning institutions has the authority to conduct period spot checks, as it infringes upon a student’s privacy.

"Education institutions are sacrosanct - a place to gain holistic knowledge and wisdom.Students must be safeguarded at all costs whilst parents will be assured that their children are learning in a safe and comfortable environment,” he said.

Lau added that he fears that more male personnel in positions of authority at schools would abuse their powers if the issue doesn't get the attention it warrants.

"By then, it will be too late if such incidents escalate to graver matters like outrage of modesty or sexual assault," said Lau.

According to a tweet by an Institute of Strategic and International Studies (Isis) Malaysia officer, about 30 female students were given cotton buds and asked to prove they were menstruating on Oct 18.

Previously in April, Radzi announced that the Education ministry would set up a new committee to look into the "period spot check" allegations.

Parents groups such as Parent Action Group for Education Malaysia (PAGE) have questioned when the proposed committee will be set up, as it is already October and there still isn't any updates from the ministry.

Melaka Action Group for Parents in Education have said since June this year, there hasn't been any updates on the committee from the Education Ministry. 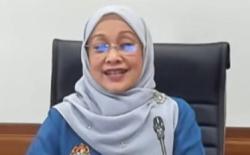