THE election of a new Dewan Rakyat deputy Speaker has once again been postponed to the next parliamentary meeting.

The election was supposed to have taken place yesterday.

Minister in the Prime Minister’s Department Datuk Seri Dr Wan Junaidi Tuanku Jaafar, who is in charge of parliamentary affairs, tabled a motion to postpone the election of the new deputy Speaker immediately after the end of Question Time.

However, no reason was given why the election had to be delayed.

Cameron Highlands MP Datuk Ramli Mohd Noor has been picked by Umno as its candidate to fill the post. Teluk Intan MP Nga Kor Ming has also been proposed as a candidate.

The other deputy Speaker is Datuk Mohd Rashid Hasnon.

Earlier, Mohd Rashid said that several MPs had yet to take their RTK-PCR Covid-19 test ahead of the second meeting of the fourth session of the 14th Parliament that began yesterday.

“Cooperation is needed from MPs to take the test immediately before they can be allowed to enter the Dewan Rakyat,” he said.

He added it is also mandatory for them to undergo a Covid-19 saliva RTK test every Monday and Wednesday. 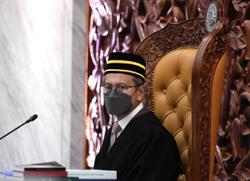