“Pig breeders are cautioned to be more alert to measures to prevent ASF (from infecting their livestock), and for those whose pigs have already been exposed to the virus, they should prevent it from spreading,” he said yesterday.

His advice came after Papar became the latest district to be declared as an ASF outbreak zone in Sabah.

Hazlan said steps recommended by the state Veterinary Services Department must be taken into consideration by villagers concerned in the district to ensure that the ASF virus could be contained.

He said Papar was declared an ASF outbreak zone after the virus was detected at Kampung Kogopon and Kampung Purak on Oct 12.

However, the 91 pigs affected had only involved backyard pigs and not commercial pigs in farms to date, according to Deputy Chief Minister Datuk Seri Dr Jeffrey Kitingan in a statement on Thursday.

Besides Papar, Kota Kinabalu and Tenom have been declared ASF outbreak zones on Sept 30 and Oct 13, respectively.Jeffrey, who is State Agriculture and Fisheries Minister, has said all incidents in these districts are considered isolated, thus the ministry has not yet considered culling pigs there while assuring the public that the pork supply in the local market will not be disrupted. 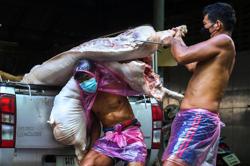