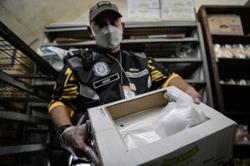 BUTTERWORTH: A tofu factory and a shrimp paste manufacturer have been ordered to close down for two weeks due to unhygienic conditions at their factories.

The closure notice was issued during an operation by the state Health Department and Seberang Prai City Council (MBSP) on Wednesday (Oct 20).

"The factories failed to meet stipulated standards on cleanliness and were found to be operating in unhygienic conditions," he said during a press conference after the operation.

He said the temporary closure order was made under Section 11 of the Food Act 1983, adding that the companies must clean up their premises before being allowed to resume operations.

He said one of the factories was also found using misleading labelling on its product that could create confusion among customers.

He said among other offences committed by the operators were using dirty machinery, putting food products on the floor, and staff not wearing proper personal protective equipment (PPE) while working.

He said the operators were also advised to send their workers to get typhoid injections and undergo food preparation courses before being allowed to resume work.

"It is important for the operators to understand and follow the Food Safety Assurance Programme so the products they sell are safe and healthy for the consumer," he said, adding that one of the factories was operating without a licence.