Lawyer M.Kulasegaran (right) elaborated on the guard assault to death Thava Sagayam's case,with him is Philomena Edward (left) .The case was postpone due to the accuse still in quarantine.

IPOH: The Magistrate's Court here has set Nov 26 for the mention of a case involving a homestay guest charged with murdering a 64-year-old security guard at a condominium here.

During proceedings on Monday (Oct 18), lawyer M. Kulasegaran – who is acting on watching brief for the victim's family – asked the court why the accused, Ahmad Noor Azhar Muhammad, was not present in court.

Deputy Public Prosecutor Sufi Aiman Azmi, upon being questioned by the magistrate, said that the accused was under quarantine at the Taiping prison.

The 33-year-old businessman allegedly assaulted the guard last December and was charged with his murder on Sept 9 after the guard died at his home on Aug 27.

The accused was represented by lawyer Ariff Azami Hussein.

According to the charge sheet, Ahmad Noor murdered security guard S. Thava Sagayam on Dec 29 last year between 8am and 9.30am at the 7th floor of Menara Majestic on Jalan C.M Yusoff here.

Ahmad Noor was initially charged under Section 355 of the Penal Code with voluntarily causing grievous hurt on grave and sudden provocation, but the charge was revised to murder under Section 302 of the same Act after Thava died. 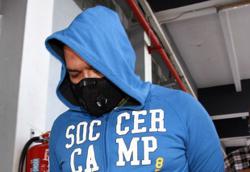