KOTA KINABALU: State Forestry officials and other enforcement agencies are keeping a close watch on the possibility of future illegal gold mining activities in Sabah, especially in forest reserves.

Sabah chief conservator of forests Frederick Kugan said although there were no further reports of such activities following a raid in Lahad Datu on Oct 10, monitoring would still be conducted.

“Illegal gold mining is not widespread as claimed, and we suspect illegal immigrants are the ones involved,” he said when contacted.

“There are no further leads to the recent case, but the department will continue to investigate, patrol and monitor the area,” he said.

However, no suspects have been arrested so far.

Meanwhile, Sabah Tourism, Culture and Environment Minister Datuk Jafry Ariffin said he was informed that such illegal activities were not rampant in Sabah.

He also said that legal mining of this nature was uncommon, as there was only one gold mining licence issued in the state thus far.

Jafry explained that for mining activities, approval had to be obtained from various parties, including the Land and Survey Department, while an environmental impact assessment report was needed before any work could start. 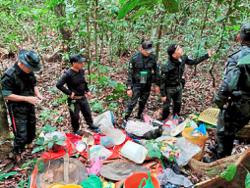 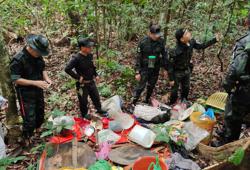 Covid-19: National infectivity rate at 0.97, Perlis only state with Rt value over 1, says Health DG
Donning headscarf at a mosque is what any responsible and professional MP would do, says Azalina
More early warning systems to be installed at landslide-prone areas, says Takiyuddin
Covering one's head at places of worship a sign of respect and modesty: Hannah Yeoh
Covid-19: No plans to end school session earlier than scheduled, says Education Minister
MH370 trending after British engineer claims he has located where it crashed
Import of frozen whole chicken will lower prices, says domestic trade ministry
Johor Sultan offers condolences to family of liver transplant surgeon Dr Tan
Over 20,000 cops, family members have contracted Covid-19 so far, says Deputy IGP
Dr Wee: Those who issue driving licences in exchange for bribes will be punished