PETALING JAYA: Two prostitution rings have been crippled by the Immigration Department after two raids led to 16 arrests.

Immigration director-general Datuk Khairul Dzaimee Daud said in a statement on Wednesday (Oct 13) that an operation dubbed Ops Gegar was conducted in Nilai, Negri Sembilan and Cheras, Kuala Lumpur on Oct 6 and 7.

"The operation was launched to dismantle prostitution operations that have been rampant during the National Recovery Plan (NRP).

"On Oct 6, a budget hotel was raided with investigations showing that sex services were offered at a flat rate of RM180 per customer. Customers chose their women ahead of time via WeChat and Telegram," he said.

Five foreign women were arrested for suspected prostitution. An Indonesian man, thought to be a customer, was also arrested.

"Checks showed that some of the arrested suspects had drug-related offences and that they were still on trial in court," he said.

A second raid was conducted the next day at a three-star hotel in Cheras.

Due to tight security, it was challenging to maintain the element of surprise, he said.

"The premises were monitored by CCTV and 'tontos' who would move in quickly to close the business if they detected any enforcement action.

"However, the raid led to the successful arrest of eight foreign women and two local men who we believe were managing the suspects.

"To avoid detection, the syndicate would register the rooms in the hotel under local names and would only accept customers who had booked beforehand using WeChat and Telegram," he said.

Sexual services ranged from RM180 per 45-minute session to RM1,800 for a full day. Payment was made online before arrival.

"Among the offences recorded under the Immigration Act included having no identification papers and overstaying. All those arrested will be detained at the Semenyih depot.

"Following the two raids, several other locations believed to be involved in prostitution have been detected. Enforcement and follow-up actions will be conducted to get rid of this immoral activity that could jeopardise the NRP," he said. 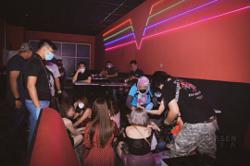