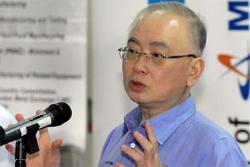 He noted that the p-hailing industry had huge potential, especially since many had turned to it to earn a living since the start of the Covid-19 pandemic.

“The Transport Ministry is talking to its stakeholders to come up with a policy that is based on the gig economy that is also vibrant for the industry.

“The p-hailing industry is not a conventional occupation, so we need to use gig economy.

“It is an industry that should be given more emphasis,” said the Ayer Hitam MP after handing over food baskets to over 50 p-hailing riders here at Dewan Gemilang Yong Peng yesterday.

Meanwhile, he said the government would not compromise when it came to those driving without licences, including p-hailing riders.

“It is a matter of safety and the lives of people.

“Those driving without licences would also have no insurance and no protection,” he said.

He was responding to reports of p-hailing riders caught without licences or were sharing the accounts of other riders.

Dr Wee said he had spoken to the Finance Minister to get government assistance to help youngsters who wanted to get their licences after their SPM.

“They may want to get licences so that they can work, but they have to pay to enrol in driving institutes.

“We need to help them, especially those in the B40 category,” he said.

On another matter, Dr Wee said the ministry, industry players along with the aviation industry are prepared for the reopening of state borders.

He noted there were previously only about 22 flights to Sarawak per week, but this has increased to 87 and it will be further increased in stages.

“Before the Covid-19 pandemic, there were about 500 flights to and from the state in a week. This means there is still a lot of space for us to gradually increase.

“We will adhere to the standard operating procedures issued by the National Security Council and at the same time ensure airlines are prepared,” he said.

On an unrelated matter, Dr Wee slammed those who threatened and threw red paint at the house of deputy MCA national public complaints and service bureau chief Chua Jian Boon.

“What Chua has been doing all this while was to help those who are facing trouble because of loan sharks and other cases.

“I believe that the state police chief, who is strict, could handle the matter,” said Dr Wee, who is MCA president.

On Thursday, Chua’s family house in Kulai was splashed with red paint.

The culprit left behind a note stating “This is just a start” in front of the house.

On Friday, Comm Ayob confirmed receiving a police report on the case and said it is being investigated under the Penal Code for causing damage through acts of mischief. 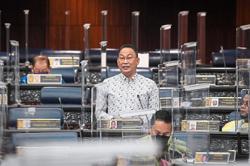 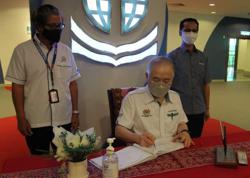