His inaugural speech at UNGA will be delivered via a pre-recorded video, highlighting the theme "the World is a Family”, and how "Keluarga Malaysia” will work together with the "world family” to manage, overcome and recover from the Covid-19 pandemic.

According to Foreign Ministry secretary-general Datuk Seri Muhammad Shahrul Ikram Yaakob, the Prime Minister will also look to health diplomacy, which is one of the main focuses of Malaysia's foreign policy framework.

"The Prime Minister will also state the country’s firm stand on political and humanitarian issues including of Palestine and Myanmar, and Malaysia’s concern over the developments in Afghanistan," he said during a briefing on the Prime Minister's participation at the 76th UNGA here on Friday (Sept 24).

Muhammad Shahrul Ikram said the Prime Minister will also reaffirm, among others, the reform of the UN, Sustainable Development Goals (SDGs) and the Global Ceasefire.

The Prime Minister will also speak on the peaceful coexistence to address the deep-rooted challenges of inequality, political instability and global governance, he added.

Ismail Sabri had also addressed the UN Food Systems Summit early Friday (Thursday local time) via a pre-recorded video, which highlighted the importance of the food systems to achieve the 2030 SDG.

"In his speech, the Prime Minister among others said the government will pay attention to the small-scale farmers who contribute up to 75% of the national food output, " he said.

Meanwhile, he said Foreign Minister Datuk Saifuddin Abdullah will represent Malaysia and deliver its statement at the high-level meeting to commemorate and promote the International Day for the Total Elimination of Nuclear Weapons on Sept 28 via a pre-recoded video.

"Here, he will reiterate the country’s undivided commitment in eradicating nuclear weapons and work closely with other nations to realise the goal of a world free from the threat of nuclear weapons.”

He said as a family of nations, Malaysia also calls on all UN member states to improve their resolve to strengthen international cooperation and multi-lateralism towards a peaceful, prosperous and sustainable world where the global community of nations live in peaceful coexistence.

Asked whether Malaysia will highlight the security partnership involving the United Kingdom, the United States and Australia, known with the acronym Aukus, at the 76th UNGS, he said Saifuddin is expected to stress the importance of all UN member states to strengthen cooperation on stabilising global security.

Muhammad Shahrul Ikram said Aukus was also discussed during the Asean foreign ministers meeting with the US on Thursday night.

It is themed "Building resilience through hope - to recover from Covid-19, rebuild sustainably, respond to the needs of the planet, respect the rights of people, and revitalise the United Nations”.

This year's general debate underscores the need for greater urgency and ambition to end the pandemic and ensure an equitable and green recovery and accelerated implementation of the SDGs. - Bernama 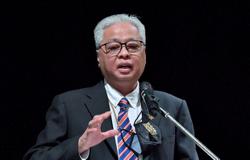