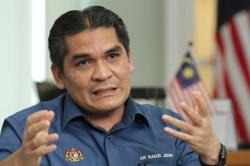 "When we reopened schools in March, parents said the situation within the (premises) was safe and organised.

"However, there was overcrowding and congestion outside the schools.

"As such, we are taking the most suitable approach, taking into account the Covid-19 Delta variant, by lessening the number of students in schools," he said in his ministerial reply to the motion of thanks on the Royal Address in the Dewan Rakyat on Thursday (Sept 23).

Under the rotation system, only 50% of a school's total enrolment can physically attend classes at a time.

Mohd Radzi also assured lawmakers that students would not miss out on their lessons under the rotation system as they will be able to follow classes online, guided by their respective teachers.

Sim Tze Tzin (PH-Bayan Baru) wanted to know if students under rotation would miss out on studies and be "on holiday".

Mohd Radzi noted that it was imperative to get students back to school again for face-to-face classes after they had been away for such a long period.

"This is particularly for students who may have had problems with online classes due to lack of computer equipment or access.

"That is why we had an in-depth discussion on the matter to find a middle ground, where we can get students back for face-to-face classes," he added.

Schools are scheduled to reopen on Oct 3 in stages after closing in June in response to the rising Covid-19 cases at the time.

To a question by Datuk Seri Abdul Azeez Abdul Rahim (BN-Baling), Radzi said primary students seeking enrolment in boarding schools would not be judged based on their academic results.

He said the students would be evaluated through a school-based assessment following the abolishment of the centralised Ujian Pencapaian Sekolah Rendah (UPSR) examination this year.

Abdul Azeez had raised concerns that rural students would not fare as well academically compared to their urban counterparts under the new schooling system.