An aide to Tengku Razaleigh briefly confirmed the matter when contacted.

Fondly known as "Ku Li", the Umno veteran expressed disappointment over the present political situation, where certain Umno leaders had collaborated with Parti Pribumi Bersatu Malaysia (Bersatu) despite a resolution of no cooperation in Umno's 2020 general assembly.

"The new Cabinet was replaced by a failed government and it even received the blessings of Umno's leadership.

"The public and grassroots members also expressed disappointment because nearly all positions filled by them came from the 'failed' government," he said in the letter.

Tengku Razaleigh subsequently questioned if the newly-formed Cabinet will be able garner public confidence when the 15th General Election comes.

"In this letter, I request to step down as the chairman of the Umno advisory council.

"It is an unconstitutional position and my resignation begins on the date of this letter," said Tengku Razaleigh.

Tengku Razaleigh has been the Umno Advisory Council chairman since July 2018.

The Umno veteran is also strongly against cooperation with Perikatan and Bersatu. 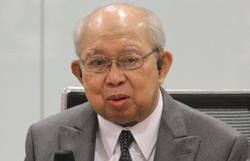