The seizure was made in a string of raids after police received information involving a cocaine distribution syndicate here.

"We arrested five men and two women, aged between 27 and 57. Five of the suspects are foreigners.

"We also seized 4.87kg of cocaine. Investigations showed the syndicate was selling the drug locally as well as shipping it to Hong Kong and Qatar," he told reporters on Monday (Sept 20).

Comm Razarudin said during one of the raids, police seized 174 sacks containing at least 5.5 tonnes of a brown powder.

"Initial checks showed the substance to be ephedrine, which is used to make syabu and MDMA.

"The seizure is believed to be worth more than RM50mil," he said, adding that the suspects have been remanded until Sept 24 to assist with investigations. 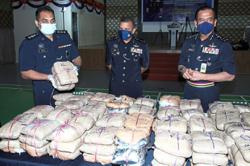