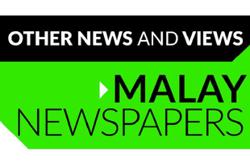 GEORGE TOWN: The story about the four-metre-long crocodile who "travelled interstate" has triggered the classic Malaysian sense of humour on social media.

Malaysians had been cracking pandemic jokes about the crocodile on The Star’s Facebook page.

"It got a Miti letter.. don't accuse la," quipped KM Chua in a comment.

Another user, Richard Ong, asked if the crocodile adhered to all standard operating procedures to travel interstate.

"Fully vaccinated? Have police permit to travel? Scanned MySejahtera to check in and out? Scanned temperature?" he asked.

Similarly, user Bailey Gi questioned if the crocodile had permission to travel interstate.

"There are only two things that I would like to know... Did it have a Miti letter for interstate travelling? Got scan MySejahtera when entering land?" he questioned.

User Chew CK jokingly said if the crocodile gets a compound notice, it can pay with its skin or meat.

Vijay Kumar quipped that the crocodile must have used lorong tikus (hidden route) to avoid the cops.

Jayaratnam Kuppusamy asked if the crocodile had a vaccination certificate.

"Does it have two vaccination certifications? Does the croc have a face mask? Then it should be (issued a) summons," he joked.

Another user Fish Mara commented that the crocodile must have heard that Penang offers walk-in vaccinations for foreigners and came to the state.

At about 7pm on Friday (Sept 17), fishermen spotted the reptile, which is estimated to weigh around 500kg, caught in a net near Pantai Bersih in Bagan Ajam, Butterworth.

The fishermen lashed the net and the crocodile over their boat gunwale and came ashore.

Firefighters, a Civil Defence team and Wildlife Department rangers were called in to secure the crocodile.

The rangers have taken possession of the reptile and the department will decide on the next course of action. 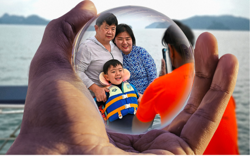