KOTA KINABALU: An elderly woman who went missing after feeding her cats and chickens in Kota Belud district on Saturday has been found safe – five days later.

The 86-year-old single mother, identified as Tianun Padis, had gone out at around 7am to feed her chickens and cats some 500m away from her house in Kampung Kalibungan.

She was supposed to return home at about 9am as per her daily routine.

Her grandson who realised that she had not returned home at her usual time, went in search of her but to no avail.

A report was lodged the following day and a search operation was mounted.

Kota Belud fire station chief Muhammad Syazwan Latun said a search and rescue operation was carried out to look for the woman.

He added that Tianun was found when she reached a gravel road at Kampung Ginapis, more than a kilometre away. A couple who was passing the area recognised her as the missing person.

Muhammad Syazwan said Tianun was believed to have lost her way home and had been searching for a way out of the forest over the past few days.

“She thought no one was looking for her,” he added.

The woman suffered bruises and cuts on the arms and legs.

She was taken to the hospital for a medical examination before she was allowed to return home.

In a separate incident, Customs officials confiscated over RM300,000 worth of contraband beer following a raid near here.

He said the raid followed a public tip-off and surveillance work. No arrest was made.

On the modus operandi of the suspects, Abdullah said they used unmarked and unnamed storage units to hide the contraband, before taking them out to sell.

The case is being investigated under the Customs Act 1967. 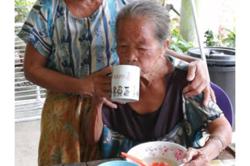