"As a government man, I will always be with the government," he said after handing out 500 food kits from the Federal Agricultural Marketing Authority to non-governmental organisation representatives at the Penang Muslim Boys Orphanage at Jalan Air Itam on Saturday (Aug 14) as part of the "Mafi Prihatin" programme.

Ahmad who was Agriculture and Food Industry (Mafi) deputy minister was responding to a question from reporters on Prime Minister Tan Sri Muhyiddin Yassin's bipartisan offer to solve the political bickering in the country.

He however refused to elaborate and stated that he was on official government duties in Penang.

Earlier on Friday (Aug 13), Muhyiddin said in a special address that he sought bipartisan support from the Opposition in order to bring the nation out of its political crisis.

He said if the Opposition agreed, a special Dewan Rakyat sitting would be convened to table a confidence motion.

Muhyiddin had also assured that he would make decisions that are honourable and Constitutional in his attempt to solve the ongoing political crisis. 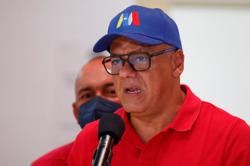