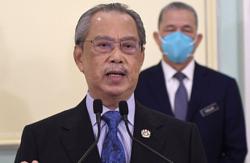 The Opposition leader said there were at least 104 Opposition MPs and eight Umno MPs who had retracted support for the Perikatan government.

"Isn't it true for us to say that Opposition parties have 104 MPs, and once you add it with the eight Umno MPs, that's 112.

"A majority of MPs have rejected the PM," he said during a Facebook Live session on Thursday (Aug 5).

Anwar cited the 2009 Perak Constitutional crisis, when three assemblymen from the now-defunct Pakatan Rakyat defected, causing the fall of the state government.

Then Perak mentri besar Mohammad Nizar Jamaluddin requested to dissolve the state assembly and call for new elections, but it was refused by Sultan Azlan Shah.

Barisan Nasional, along with the support of the three defecting assemblymen, then formed the new state government.

"It was ruled that the Sultan has absolute powers in this matter. It cannot be disputed when the Yang di-Pertuan Agong or the Sultan is confident that someone possesses the majority."

"A new MB was then appointed. This cannot be disputed," said Anwar, referring to the appointment of PAS' Jeneri assemblymen Muhammad Sanusi Md Nor as Mentri Besar.

Anwar said it is clear that the Perikatan government has fallen and a country cannot be led by a leader whose legitimacy to lead is being publicly disputed.

"Otherwise, it will spook foreign investors," he added.