The Simpang Renggam MP received over 13,000 retweets and over 20,000 likes after uploading a picture of his desk in the Dewan Rakyat with a pair of binoculars on it.

The caption alongside the picture stated “Never (have) I imagined that one day binoculars would be essential stuff in Parliament.

“Who knows, more ministers would be bringing placards with small writing on them,” he said in a tweet believed to be in reference to International Trade and Industry Minister Datuk Seri Azmin Ali who had presented information on a small placard in Parliament on Monday (July 26).

Some who were entertained by the tweet also questioned the action by the minister.

“Why are they not showing the charts using Powerpoint slides and sharing it with MPs through screens? Are they (the MPs) not provided with computers?” a user replied.

“Dr (Mazlee), does the Parliament hall not have any projectors? I thought we are going towards the Industrial Revolution 4.0 (IR4.0),” another user said.

In a separate tweet on Monday (July 26), Azmin Ali uploaded the image that he presented during the parliament sitting.

“This is the placard that I presented in the Dewan Rakyat earlier (July 26) which explains the pandemic we are facing,” he tweeted.

Never I imagined that one day binoculars would be an essential stuff in the Parliament...

Who knows more ministers would be bringing their placards with small writing on them.... pic.twitter.com/0tjlWFHkHe 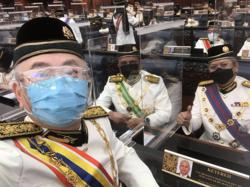