PETALING JAYA: A grouping of activists and Opposition lawmakers have lodged a police report against the Perikatan Nasional administration for allegedly failing to properly manage the Covid-19 crisis in Malaysia.

Saying that close to a million people have been infected with Covid-19 so far, the group called for more accountability from the government.

Among the issues outlined in the report were not enough early testing carried out, insufficient information shared by the government, the treatment of migrant workers, and not enough resources given to hospitals early.

"This involves the lives of Malaysians and they must take this very seriously," Ambiga said after lodging the report on Sunday morning (July 25).

Section 269 deals with a negligent act that could spread an infectious disease and if found guilty, offenders could get six months' jail, a fine, or both.

Section 304 (a) deals with punishment for causing death by negligence, and those found guilty could get two years' jail, a fine, or both. 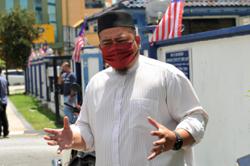