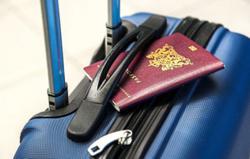 So near yet so far: Gayathri hopes she can reunite with her husband Susheendran if the government allows those who have been fully vaccinated to enter Malaysia from overseas without undergoing quarantine.

JOHOR BARU: Married couple R. Gayathri and K. Susheendran are hoping that the government will allow those who have been fully vaccinated to enter Malaysia from Singapore without having to go through quarantine, at least on the Malaysian side.

Private tutor Gayathri, 33, said she and her 42-year-old husband, who works as a technician in Singapore, last saw each other in December when he was able to return under the Periodic Commuting Arrangement (PCA).

“My husband registered for the vaccine as early as April, hoping he could see me again without having to go through quarantine once he completed his second dose.

“He has now received both doses of the vaccine, with the second dose administered in the middle of this month, but there are still no signs indicating we could meet anytime soon,” she said.

Gayathri said while her husband’s company has taken up the responsibility to pay for the quarantine expenses of its Malaysian employees for one visit per employee each year, her husband will still have to use up his leave for the mandatory 14-day quarantine to enter Malaysia and another similar quarantine upon return to Singapore.

In all, a person who serves the mandatory quarantine on both sides of the Causeway will end up paying more than RM7,000 for the Covid-19 testing and quarantine facilities.

Gayathri, who has been living alone since January at her house in Johor Baru, also hopes that she could once again be reunited with family members who have been fully vaccinated in Malaysia.

“I hope that the government would also consider those who have been fully vaccinated, such as my mother, to travel across state borders,” she said, adding that she is still waiting for her vaccination appointment.

Assistant chemist M. Eddie, 26, who is working in Singapore, said he hopes to be able to return to Malaysia without having to go through the quarantine once he receives his second dose of the vaccine next month.

“I really hope that both governments could consider removing the mandatory quarantine as that has been a huge hurdle for families to see each other.

“In the long run, I hope both governments could also arrange for a way for people to travel across the border on a daily basis,” he said.

Technician Muhammad Razif Abd Rashid, 32, who also works in Singapore, hopes that the mandatory quarantine could at least be removed on the Malaysian side.

PCA is a Safe Travel Lane agreed between Singapore and Malaysia to support companies in both countries by facilitating movement of workers across the Causeway or Second Link.

Under the PCA, approved travellers or employees are required to remain in their country of employment for at least 90 days before returning to their home country for “short-term home leave”.