KOTA TINGGI: The state government is allocating about RM4.5mil to RM5mil to help some 291 families affected by a storm that hit Tanjung Sedili on Friday (July 23) afternoon.

Johor Mentri Besar Datuk Hasni Mohammad said about seven villages were affected by the storm and there were houses that were totally destroyed.

"The victims have been sent to two temporary shelters here while some have opted to move into their relatives' homes.

"The state government would be providing financial aid of between RM5,000 and RM15,000 to each family whose house was damaged in the storm depending on the severity of the damage.

"We will be allocating funds totalling about RM4.5mil to RM5mil to assist those affected by the incident," he said after visiting the temporary shelter at SK Sri Setia Jaya on Saturday (July 24).

He said apart from houses and some shops, several government buildings were also damaged including a health clinic, and several schools.

The storm reportedly took place between 4pm and 5.20pm on Friday. However, no injuries were reported. 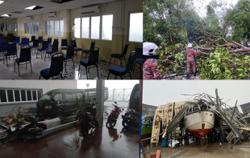