Chow said as of Thursday (July 22), the state has achieved a daily injection rate of 30,055 vaccine doses.

“With the number of injections, the Covid-19 Vaccine Supply Access Guarantee Special Committee (JKJAV) reported that Penang is ranked sixth compared to other states in the country.

Chow added that under Phase Three of the National Covid-19 Immunisation Program (PICK), the Penang Health Department reported that a total of 207,607 people had received the first dose and 27,229 have received both doses of a vaccine as of Wednesday (July 21).

“These efforts are actively continued to ensure that Penang successfully enters Phase Three of the NRP and subsequently achieves cluster immunity.

“As of July 23, there are a total of 12 public vaccination centers (PPVs) in the state, including four government hospitals,” said Chow.

He added that besides the the public PPVs, there are two integrated PPVs, one mega PPV, two PPV at institutions of higher learning, 10 private hospitals and 58 general medical practitioner PPVs for the general public with a maximum injection dose capacity of 20,830 people per day

“On Monday (July 26), a non -governmental organization PPV will be opened in Juru, with a capacity of 1,000 injections a day,” said Chow.

He also said that nine PPVs under the Public-Private Partnership Covid-19 Industry Immunisation Programme (Pikas) are also operating now with a total capacity of 10,200 doses per day.

“This proves that apart from the industrial sector, the state government also gives priority to the operation of public PPV for vaccination of Penangites as a whole,” he said. 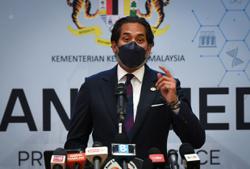