10 illegals arrested while waiting for speedboat

KOTA KINABALU: Police have arrested 10 illegals, including two children, during a raid to weed out undocumented immigrants in Tawau.

The operation in the wee hours of yesterday, dubbed Ops Cegah Pati, was conducted by the Eastern Sabah Security Command (Esscom).

Esscom commander Deputy Comm Datuk Ahmad Fuad Othman said the suspects, comprising two men, six women and two children, were arrested while they were hiding in some bushes along Jalan Pantai Tawau Lama at 12.10am.

“The raiding team spotted some movements in the bushes and went to investigate.

“There, they found the suspects, aged between six months and 54. All of them were undocumented Indonesians,” he said.

The suspects are believed to be making plans to return home using illegal routes. They were waiting for a speedboat to arrive when they were found.

All of them were taken to the Tawau police station and would be investigated under the Immigration Act. 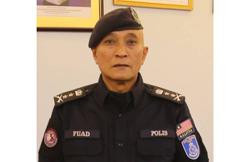