SEREMBAN: More undertakers are being roped in to help families with final rites for loved ones who succumb to the Covid-19 virus because some unscrupulous companies have been charging exorbitant rates, says a state exco member.

“It has come to my attention that some of these funeral service providers have taken advantage of the situation and charge ridiculously high rates. This is totally unacceptable.

“Some crematoriums are also charging more and this makes no sense,” he said in a Facebook post on Wednesday (July 21).

Arul said he has been in talks with several companies that have agreed to provide the service for Covid-19 victims at reasonable rates.

He said some of those who have been overcharging claimed the families had to bear the cost for the workers' personal protective equipment (PPE) and sanitisation work.

Arul, who is also state human resources and plantations committee chairman, said he was negotiating with several government agencies to supply free PPE to grieving families to help reduce costs.

It was reported earlier that some families claimed they were charged double or up to three times more than regular funeral services to cremate their loved ones who died of Covid-19.

State health committee chairman S. Veerapan had also said some undertakers charged between RM4,000 and RM5,000 with “special packages” as high as RM7,000.

He said a reasonable rate would be RM500 to RM1,000 as all they needed to do was transport the remains of the deceased, already sealed in a coffin, to the crematorium or cemetery.

Arul said undertakers and crematoriums have no reason to charge more as the final rites and related religious ceremonies for Covid-19 victims were shorter than the usual practice.

He also dismissed claims by some undertakers that they had been appointed by the health authorities or a particular hospital and that families had no choice but to use their services.

“I have checked with the relevant government agencies and none of them have said specific undertakers or companies were given permission to provide the service for Covid-19 victims.

“Families are free to make their own choice based on what they can afford,” he added. 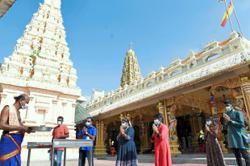