Stay safe by assuming everyone you meet is Covid-19 positive, doctor urges Malaysians 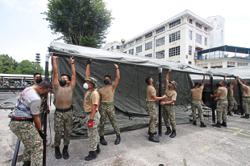 PETALING JAYA: A doctor says Malaysians need to treat everyone they encounter in their daily lives as Covid-19 positive, so they should increase the precautions they take.

In a video clip posted on Facebook and Instagram on Friday (July 16) after what she described as a "long, tiring, exhausting day at work, Dr Dhivya Dhyana said it was best for everyone to "stay away from everyone" else until the number of cases reduces.

As an example, she shared an account of her encounter with a 90-year-old Covid-19 patient at the public hospital in Selangor where she serves.

"Yesterday, she succumbed to the illness and passed away. A day before that, we found out that her son – who was also positive – was in the same ward and nobody knew ... They were admitted at different times and brought in separately.

"The family at home was not sure which wards they were in," she said, adding that the wards are huge and have many patients.

She said the son only had one day to be with his mother before she died.

Dr Dhivya said even more upsetting was when she learnt that three others from the same family were in the same hospital but in different wards.

"None of them knew they were admitted to the same hospital. By the time we found out (they were related), many of them were already at the late stage," she said, adding that hospitals do not always have time to identify families with hundreds of patients coming in every day.

Further checks showed that the five family members did not live in the same house but had a birthday gathering recently.

"Everyone thinks it's okay to just visit for a while, or 'I'm just gonna visit my friend for 10 minutes' or 'I'll just pass this to my neighbour'.

"All these small things which we think are harmless are causing the bigger problem," she said.

"Whether it's your neighbour, the food delivery rider, the aunty that you go for walks with, your friends or family, anyone can be Covid-19 positive. So you have to stick with that mentality.

"At this point, there's no reason for anyone to go out unless you are a frontliner, there is an emergency or someone is literally dying," Dr Dhivya, who was the 2016 Miss Universe Malaysia first runner-up, said in the video.

The 10-minute video has been viewed over 300,000 times and widely shared on social media.

She also said that the number of patients brought in dead at the hospital has increased, with some suddenly collapsing for unknown reasons and later testing positive for Covid-19.

According to her, hospitals were overwhelmed, with wait times for beds stretching to days.

Due to the high number of admissions, families are often unable to get hold of relatives to find out how they are faring, she added.

"When they are taken to the hospital, you just don't know if that's the last time you will see them," she said.

Dr Dhivya also said patients who came to the hospital for non-Covid-19-related emergencies were unable to get treatment because of the overwhelming number of Covid-19 cases and a lack of resources.

"It has come to the point where we are choosing who we can save... who we can ventilate," she claimed.

"If the numbers continue rising, I really don't know what's going to happen," she said, adding that everyone should just stay at home.

She said it was easy to say the system has failed or the rules and regulations were not what they should be.

"But what are we doing as the people to flatten the curve? I don't think we're doing enough because everyone is still out and about," she said.