One more step towards herd immunity with new PPV

He said the PPV, located at the Yong Peng Che Ann Khor Moral Uplifting Society multi-purpose hall, had 998 appointments on its first day of operation yesterday.

“This includes some senior citizens aged 99, 97 and 94. And over time, the number of vaccines dispensed will increase to its maximum capacity of 2,000 doses a day.

“This PPV is considered quite big with around 200 medical staff and volunteers available to assist those who show up for their vaccination appointment,” he said after visiting the PPV.

Dr Wee, who is Ayer Hitam MP, said the centre was scheduled to operate for six weeks to dispense vaccines to residents in the Yong Peng and Ayer Hitam areas.

Operations at the PPV were smooth on its first day and the downpour yesterday morning did not deter residents from showing up to receive their shots, he added.

“After speaking to some of them, the general feedback was satisfactory.

The PPV has 20 inoculation stations and spacious pre- and post-jab waiting areas.

Separately, Dr Wee said his ministry expected about 107,000 public transport frontline workers to receive at least one dose of the vaccine by the end of next month.

This involves those in the aviation, maritime and land transport industries.

Since June 24, he said about 55,000 vaccinations had been given to the frontliners in the maritime, aviation and land transport industries (including rail and bus).

“The remaining 60,000 or so will be done as soon as possible in the second phase, by the end of August,” he said adding that the total, however, did not include taxi and e-hailing drivers.

“This group of individuals will be receiving their vaccination at PPV in the community to make it more convenient for them, as there is no need to group them all together in one location to give them their jabs.”

He added that the list of taxi and e-hailing driver names available to his ministry had been submitted to the CITF for further action.

After visiting the PPV, Dr Wee handed out basic necessities such as rice and cooking oil to three families at Kampung Bunagong and Kampung Batu Satu in Ayer Hitam.

“Two of the recipients suffer from chronic illnesses while the other is a carpenter who lost his job during the third movement control order,” he said.

He also promised two of the families that their leaking roof and damaged wall at their homes would be fixed as soon as possible, adding that he distributed food aid to about 20 taxi drivers in Ayer Hitam as well.

Dr Wee said his team of volunteers at the Ayer Hitam MP service centre would continue distributing food aid to those in need.

He later paid a visit to Chung Yung, 84, in Kampung Baru, Ayer Hitam, whose son suffers from congenital heart disease. 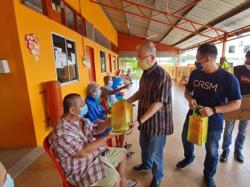