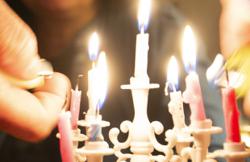 ALOR GAJAH: A 14-year-old is among seven teenagers who were issued with a RM5,000 compound notice each by the police for holding a birthday party in Pulau Sebang.

They had travelled from Gemas, Negri Sembilan into Melaka.

Pulau Sebang is located smack in the border of Negri Sembilan and Melaka.

The teenagers – four girls and three boys, aged between 14 and 18 – were detained when they gathered in front of the house of the birthday girl in Taman Baiduri, Pulau Sebang, at about 5pm on Saturday.

Supt Arshad said the 17-year-old girl who had organised her birthday gathering was issued a RM4,000 compound notice.

“We view the case as a serious offence as the teenagers had entered the state from neighbouring areas which presently have high positive Covid-19 cases,” he said yesterday.

Supt Arshad said the compound notices were issued under Regulation 4(1) of the Disease Prevention Measure and Control Act 2021.