ALOR SETAR: The police have begun investigations into the alleged cruelty of Kulim Kedah Municipal Council (MPKK) enforcement workers during an operation to catch stray dogs at the Taman Tiram housing area in Kulim.

“An investigation paper has been opened under Section 428 of the Penal Code for committing mischief by killing, poisoning, maiming or rendering useless any animal, which provides for imprisonment of up to three years or a fine or both, if convicted.

“We are still in the midst of investigations to determine the laws and standard operating procedure in dealing with stray and feral dogs,” he said in a statement, as reported by Bernama.

A video showing the workers torturing a dog during an operation last Thursday has since made its rounds on social media.

“Over the years, we have seen many instances of cruelty to dogs but there have not been many prosecutions.

“This could be due to the lack of police reports.

“I wish to call on the public to lodge reports so that investigations can be carried out and offenders brought to justice,” he said.

Lee commended animal activists who were ever vigilant against such acts of cruelty.

“Many of them have been feeding and caring for dogs that roam the streets as strays,” he said.

“It is timely for us to remember the words of Mahatma Gandhi who said: ‘The greatness of a nation and its moral progress can be judged by the way its animals are treated.’” 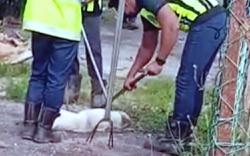