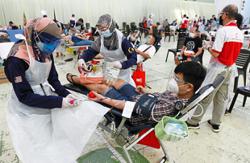 This is to avoid the needy having to scramble for donations and creating a crowd, or unscrupulous folk taking advantage of the situation.

“The police are not happy about groups giving food to the poor on the streets because it often leads to crowding,” said Phee.

He called on NGOs to coordinate with the state Welfare Department, district offices and village community management councils so that aid is channelled properly.

Similarly, he said the people should not take advantage of the generosity of donors.

For instance, Bukit Tambun assemblyman Goh Choon Aik discovered a man who was found to have collected seven bags of rice, among others.

Goh said his team had immediately sent supplies to the man, who had raised a white flag outside his house early this month.

“When we returned later to see him, we saw seven bags of rice and other rations in his house where he lived alone,” said Goh.

Goh called on NGOs in his constituency to liaise with his service centre as it was vital to pool resources and channel them correctly.

Besides rice, he said other items were also needed such as diapers and milk powder.

Some of them assumed they could take as much as they wanted because “it was from the government”.