"After an investigation, we conducted raids in Putrajaya and Brickfields on Wednesday (June 23).

"We arrested two women and a man aged between 23 and 50 years old," he said when contacted Thursday (June 24).

Six mobile phones and various documents were seized during the raids, he added.

"Initial investigations revealed that the suspects had set RM420 for two doses of the alleged vaccines.

"Payment would only be made once the vaccines were administered," he said.

Comm Azmi said the CITF confirmed that no approval has been given to any party to sell the vaccines.

"We advise the people not to believe any offers for sale of Covid-19 vaccines. 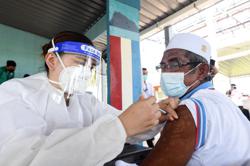