Maqis seize over 27,000kg of frozen buffalo meat due to misleading label information

State Maqis director Noriah Dahlan said the items were labeled with misleading information, as the halal certificate issued from the exporting country was inaccurate and different from the labeling details on the imported merchandise packages.

“The use of inaccurate and misleading information on halal certificates will be investigated under Section 13 of Malaysian Quarantine and Inspection Services Act,'' she said in a statement on Thursday (June 24).

Under the Act, any person who provides false, inaccurate or misleading information in the importation of agricultural products is an offence.

Offenders face a maximum fine of RM50,000 or a jail term of up to two years or both, if convicted.

Noriah said imported agricultural products would be inspected at the entrance into the country to ensure that plants, animals, carcasses, fish and microorganisms were free from the threat of pests, diseases and contaminants. 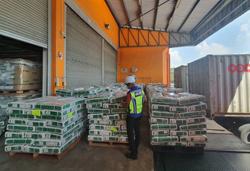