PUTRAJAYA: The Home Ministry will be coordinating nationwide enforcement activities by various agencies against factories which do not follow standard operating procedures.

He said the government had received complaints recently involving the manufacturing sector, claiming that certain factories were abusing permits given to operate by carrying out non-essential activities during the lockdown.

"We have received information of factories violating SOPs, including operating with more than the 60% capacity permitted," he said on Monday (June 21).

Ismail Sabri said that authorities also received complaints of factories that made their workers who were supposed to be in quarantine – and wearing pink wristbands – to work.

"Factories identified will be issued compound notices and will be ordered to close immediately.

"The NSC has agreed that all responsibility to enforce the law nationwide, including carrying out raids and operations, will be placed under the Home Ministry which will coordinate all enforcement activities," he said. 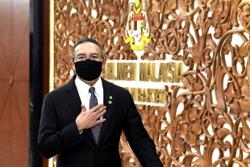