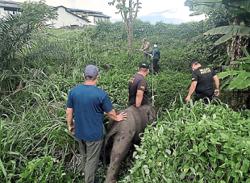 Yuri being rescued by teams from WRU East Coast and SWD Lahad Datu.

KOTA KINABALU: An elephant calf which has been wandering an estate alone after it was believed to have gotten lost in the Lahad Datu district has been rescued by wildlife rangers.

The male Bornean pygmy elephant calf, estimated to be just about one year old and has been named Yuri, was first discovered by estate workers at the Felda FGV Sahabat 9 Baiduri Ayu estate on June 15.

“Rangers had gone to check on the calf, and monitored it for a few days while trying to get it to go with a herd of pygmy elephants close to the area but the herd did not accept it,” he said, adding Wildlife Rescue Unit (WRU)rangers were called in for help.

When contacted, he said the rejection could be due to several reasons including one, it was not its herd, two, the calf has been away for too long or three, there was too much human-scent on the calf as it has been in close proximity with humans.

Dr Sen added that there could be other reasons as well.

Nevertheless, he said the calf will meet with new elephants to call family soon, as it has been taken to the Sepilok Orang Utan Rehabilitation Centre (SORC) for further care.

In his Facebook post, he mentioned that the calf, apart from being a bit confused, was bright, alert and responsive.

Dr Sen said rangers had tried to feed it with milk but it did not want to drink, as it was not familiar with the flavour.

“It, however, drank lots of water and ate solid food such as banana trunks,” he said.

He said Yuri had minor skin injuries on the left forelimbs and front head.

“We would like to take this opportunity to thank the Malaysian Palm Oil Council, Malaysian Palm Oil Green Conservation Foundation, Orangutan Appeal UK and Oregon Zoo for funding all the wildlife operations that WRU conducts,” he said. 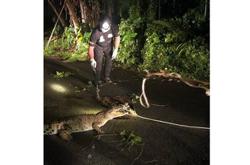 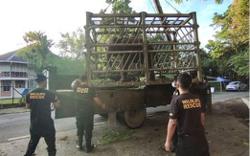