Marine cops in Tawau seized over 4kg of Syabu on Monday night.

KOTA KINABALU: Marine police in Tawau district have seized what they believe is syabu worth about RM200,000 during an operation on Monday (June 14) night.

Tawau operations base commanding officer Deputy Supt Nazari Ismail said the confiscation was made during their routine Ops Benteng Covid-19 patrols at the Kg Hidayat water village area at 8.42pm.

“During our rounds, we saw two vessels listing at a suspicious location near the shore and when our men approached, they saw three persons jumping into the sea before fleeing onto land,” he said. He said marine officials inspected the boat and found five packets of what seemed to be drugs weighing about 4.3kg valued at about RM197,640 inside.

“The drugs and boats were seized and taken back to our base before handed over to the Tawau narcotics unit for further investigation,” DSP Nazari said.

The total value of the confiscations comes up to about RM426,725, he said.

He urged the public to continue helping security forces in combating crime and to provide related information to the marine cops via their WhatsApp number at 013-2831197. 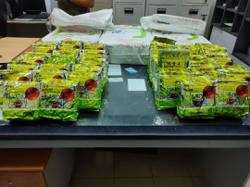