JOHOR BARU: A syndicate which supplies ketum has been busted with the arrest of five of its members by the General Operations Force (GOF).

Ketum worth more than RM76,000 was also seized during the operation.

GOF Fifth Battalion commanding officer Supt Dimin Awang said they raided a premises along Jalan Banjaran 4 in Tampoi here and arrested the suspects who are between 29 and 54 years old.

“Initial investigation found all of the suspects involved in supplying and processing ketum leaves,” he said in a statement on Tuesday (June 15).

Supt Dimin added that the GOF also made several seizures during the raid including 20 sacks believed to contain ketum leaves. Each sack weighed around 30kg.

He said they also found 18 plastic bags filled with what is believed to be ketum leaves weighing 12kg each.

“We also seized four (containers) filled with 20 transparent 1.5 litre bottles of green liquid believed to be made from ketum.

“Following the seizures and arrests, GOF has crippled a ketum supplying syndicate operating around here and Kulai,” he said. 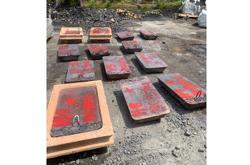