IPOH: For the first 11 days of the month since the lockdown, police in Perak have issued a total of 1, 239 compounds for standard operating procedure (SOP) non-compliance.

Perak police chief Comm Datuk Mior Faridalathrash Wahid said the majority of the 244non-compliance compounds were issued to those who failed to wear a face mask.

“We have set up 63 roadblocks state-wide, and any additional ones will be made based on current needs.

“Any need for mobile roadblocks will be conducted according to the needs by the district OCPDs, and police station chiefs, especially for shortcut lanes, ” he added.

The teams would also be increased according to the needs.

“We will also be setting up a centralised integrated monitoring team involving several other government agencies.

“The agencies will include the Health Ministry, Domestic Trade, Rela, National Security Council, and the local councils.

“Targeted monitoring will be carried out based on public complaints on SOP violation, ” he added. 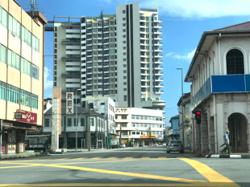