No truth of many policemen contracting Covid-19 as frontliners, says Sabah police

KOTA KINABALU: Sabah Police Commissioner Datuk Hazani Ghazali dismissed claims of many policemen getting Covid-19 while on duty as frontliners.

Speaking to reporters on Thursday (June 10), he said at present there are only 15 policemen with active Covid-19 cases across Sabah and Labuan.

He was responding to claims that many of the policemen are exposed to the virus especially in Labuan which has high numbers of Covid-19 cases and in particular while manning roadblocks.

Previously, he noted over 100 police personnel members tested Covid-19 positive after the Sabah state elections, while there was a time last year where 1, 000 had to be quarantined for suspected infections.

"So our force is not paralysed in any way, even then when we had over 1, 000 personnel quarantined, the rest of the team continue to carry out their duties," he said after receiving a working visit from the Chief Minister Datuk Seri Hajiji Noor at the state police headquarters.

Hazani said nearly 85% of Sabah police had been vaccinated, with over 8, 000 having completed their two doses.

He also clarified there was no issue with cross-district movements in Sabah with the International Trade and Industry Ministry's (Miti) approval letter.

"As long as there is a letter from the employer and department for official business to cross district borders, I told the roadblock teams to allow them to pass.

"But we do not deny some took advantage of these letters and misuse them to go back to their hometown for example, so we will take appropriate actions," he added.

Meanwhile, when asked about ongoing operations to identify any Abu Sayyaf members' movements in the state, he said they will continue to monitor with the full cooperation from Eastern Sabah Security Command (Esscom) and their Philippine counterparts. 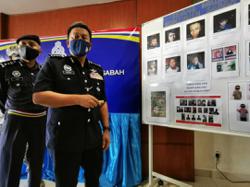