KOTA KINABALU: Labuan is in need of a rapid vaccination drive for its people as concerns are growing over the infectious Covid-19's Delta variant, says its chamber of commerce.

Labuan Chamber of Commerce and Industries president Datuk Wong Kii Yii said that there was a need for the Federal Government to take immediate steps to speed up the vaccination drive with the island recording over 5, 300 cumulative cases.

"The pandemic is at a dangerous peak. The authorities must speed up the Labuan vaccination program as there was a high risk to the economic activities of the island," he said on Thursday (June 10).

He said that vaccinating the people on the island should not be a problem as there were government clinics and the Air Force medical corp can also be roped in to carry out the vaccination.

Wong said that it was important to check the spread of the pandemic, as Labuan was an international offshore financial centre as well as the main base for oil and natural gas industries that see many international business players arriving on the island.

Labuan Health Department director Dr Ismuni Bohari said that the surge of cases in Labuan was due to the presence of the Covid-10 Delta strain that was likely to have spread during Hari Raya gatherings among families last month.

He urged the public to strictly adhere to the SOPs while health authorities conduct mass screening of between 800 to 2, 000 swab tests a day with the help of private clinics.

There are four active clusters in Labuan and movement has been restricted within identified zones on the island under the current lockdown.

Many food businesses have also decided to stop operating recently even though they are allowed to operate for take-aways. 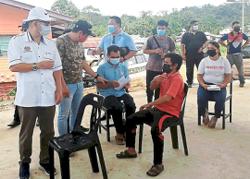 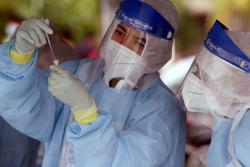