JOHOR BARU: Police have busted a South Korean online gambling syndicate that has raked in over RM87mil since it started operations here about two years ago.

“During the raids, police arrested 10 male suspects, nine South Korean nationals and a Malaysian, between the ages of 29 and 66.

“The South Korean suspects acted as customer service agents for the online gambling operation while the local suspect is the group runner and would tend to their needs, including bringing food and finding lodging for them, ” he told a press conference at state police headquarters here on Monday (June 7).

He added that investigations so far revealed that the syndicate would target customers from their home country and every financial transaction was made into a South Korean bank.

“We also found that the syndicate is able to take in about RM1mil in bets daily and about 1,500 gamblers are involved in this, ” he added.

Comm Ayob said the foreign suspects entered the country on social visit passes between the end of 2019 and early last year and had rented several high-end residential units.

He also said the syndicate would relocate every three to six months to avoid the police.

He added that all the South Korean suspects had been remanded for 14 days from Sunday (June 6) while the local suspect was being remanded for three days.

Comm Ayob said the case was being investigated under Section 4(1)(G) of the Open House Gambling Act 1953, Section 15(1)(C) of the Immigration Act 1959/63 and Infectious Diseases Prevention (Measures in Infected Locally) Act 2021. 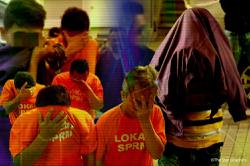