Another grim Covid-19 milestone with 872 in ICU 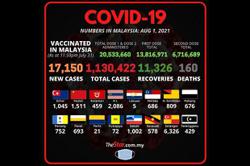 The last time Malaysia had such a high number of ICU patients was on May 7, with 506 cases.

He added that Selangor recorded the most deaths at 28 cases, followed by eight in Johor, seven in Sarawak, six in Kuala Lumpur, five in Kelantan, four in Melaka, three in Kedah, two each in Negri Sembilan, Perak and Terengganu, and one each in Sabah, Pahang, Labuan and Penang.

Of the 71 deaths, five of the patients were brought in dead (BID), including a 78-year-old man from Sarawak with high blood pressure, a 58-year-old woman from Selangor with diabetes, and a 93-year-old man from Labuan who had no pre-existing medical condition.

Perlis is the only state that did not record any new Covid-19 cases yesterday, he said in a statement.

Of the 7,105 new cases, two were foreigners while the rest were Malaysians.

There were also 6,083 recoveries, which means 496,121 people have recovered from the disease nationwide since the pandemic broke out here early last year.

Dr Noor Hisham advised those who have been vaccinated against Covid-19 to continue abiding by the standard operating procedure to curb the spread of the virus.

“Get screened immediately if you are showing symptoms or are a contact to a positive case, ” he added.

Dr Noor Hisham said those who were found to be positive should inform the Health Ministry through the MySejahtera app or their nearest district health office.

“Abide by the SOP as per the new normal. The ministry will continue monitoring developments in Malaysia as well as internationally, through information obtained from the World Health Organisation, ” he added.

The country is currently in a 14-day nationwide total lockdown that will end on June 14.