MELAKA: The Malaysian Maritime Enforcement Agency (MMEA) has foiled a tanker’s attempt to escape from detention by navigating the Straits of Malacca in a bid to dodge authorities.

MMEA Negri Sembilan/Melaka director Maritime Captain Haris Fadzillah Abdullah said the vessel was intercepted at 2.30am on Saturday (May 22), when spotted at the waters of Tanjung Tuan in Negri Sembilan.

"Preliminary investigations showed that the vessel registered in Vietnam was heading towards the north," he said.

He said they promptly acted to an alert from the Maritime Sea Surveillance System at 9.55pm on Friday (May 21) before intercepting the vessel registered as MT JW Jewel about 15 nautical miles from the Port Dickson coastline.

"Our counterpart in Johor also found the vessel missing from its location on Friday night before alerting us," he said.

Haris Fadzillah said a 47-year-old captain and his 44-year-old chief engineer were detained for further questioning.

"Both of the detained men are Indonesians," he said.

He said the vessel was among 13 ships that were detained by Johor MMEA on March 27 for anchoring without permission along the Tanjung Balau waters in the state.

Haris Fadzillah said investigation is being conducted under the Merchant Shipping Ordinance 1952 for dropping anchor without permission, which provided fines of up to RM100,000 or jail term up to two years or both, upon conviction. 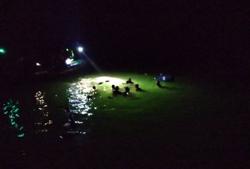